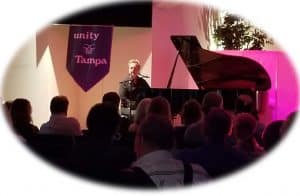 If you missed last year’s concert, you won’t want to miss him now. If you attended, you’ll want to experience the magic again as he performs music from his new BEST SELLING albums, along with old favorites, and improvises on the grand piano, creating new, spiritually uplifting music on the spot! Take turns lying under the piano as he plays just for you.

Two-time Grammy winning/multi-platinum selling pianist/composer Peter Kater has been a leading innovator of contemporary instrumental music for over three decades. He has received many awards and accolades for his rich and diverse music including 14 Grammy Award nominations and two Grammy wins.

Kater has released over 70 critically acclaimed recordings and has scored the music for over 100 television and film productions including 11 On & Off-Broadway dramatic plays. His cross-genre music is heard all over the world, from the Olympics to Carnegie Hall. He is known for his numerous groundbreaking collaborations with musicians such as Native American flutist R. Carlos Nakai; Sting guitarist Dominic Miller and Sacred Chantress Snatam Kaur.

And, as an avid environmentalist and humanitarian, Peter Kater is a proud recipient of the Environment Leadership Award from the United Nations.

Tickets are available at https://tickets.brightstarevents.com/event/peter-kater-tampa-florida-2022

Unity members can get tickets on Sundays at Unity of Tampa for a special discount and no service charge! Email TampaUnity@gmail.com for more info